MM7WAB/P working other licensed amateur radio stations from the commemorative cairn enclosure at the Knockshinnoch Castle Colliery disaster site on Sunday 13 June 2021. Many thanks to the stations that worked me on 2m FM simplex and via the FreeSTAR network during this activation. 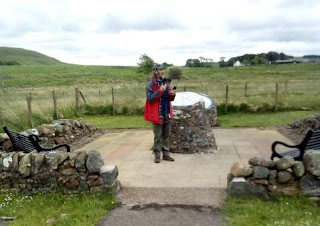 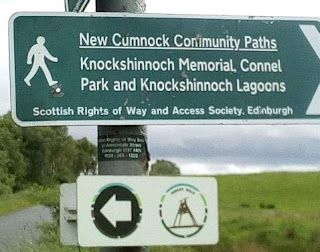 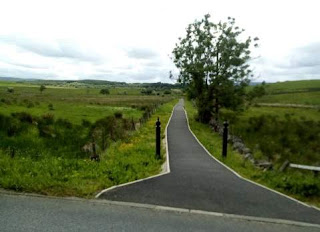 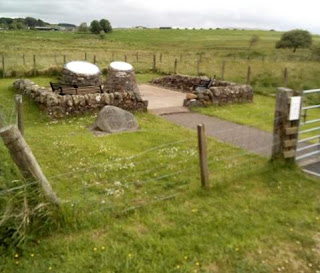 The enclosure has a wide gate for ease of access and is well cared for. 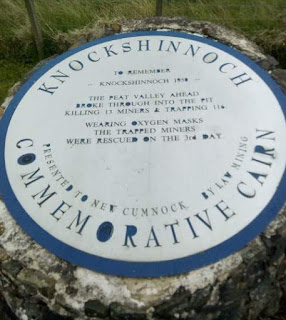 The commemorative cairn at the Knockshinnoch Castle Colliery disaster site. 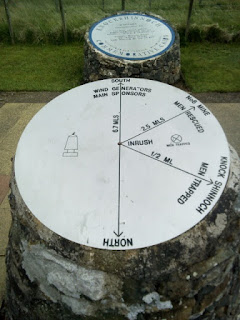 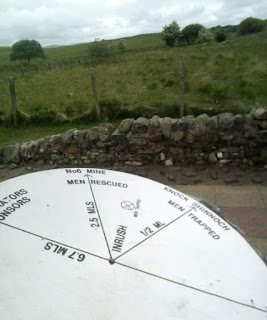 View towards crater site over the sighting pillar. 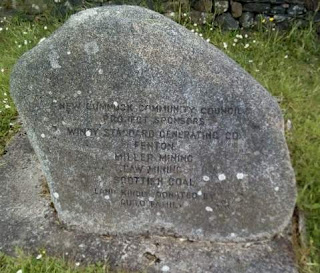 Detail of the stone at front of memorial enclosure. 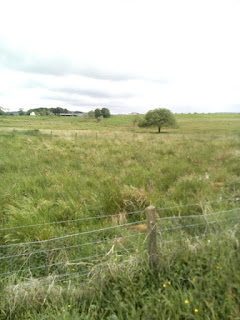 View across location of the crater.
The disaster occurred on 7 September 1950 when workings driven too close to the surface allowed a peat basin at the surface to burst into the mine, the ensuing inrush trapping 129 miners underground, of whom 13 subsequently died. Most of the trapped men were heroically rescued through workings connected to the neighbouring Bank No. 6 Colliery.

The accident occurred about 7.30 p.m., whilst the afternoon shift was at work, on Thursday, 7th September, 1950, when a large volume of liquid peat suddenly broke through from the surface into the No. 5 Heading Section of the Main Coal Seam. The inrush started at the point where the No. 5 Heading, which was rising at a gradient of 1 in 2, had effected a holing at the outcrop of the seam beneath superficial deposits and had made contact with the base of a large natural basin containing glacial material and peat. The liquid matter, rushed down the steeply inclined heading and quickly filled up a large number of existing and abandoned mine tunnel drifts and roadways as well as several working places. This inundation of liquified peat /moss cut off the two means of egress to the surface from the underground workings of the Knockshinnoch Castle colliery.

There were 135 miners working underground at the time. Six men working near the main shaft bottom quickly escaped to the surface by way of the downcast shaft before it become blocked, while 116, with all means of escape cut off, found their way to a part of the mine then unaffected by the inrush, leaving 13 persons missing. The 116 men trapped below ground were rescued after an incredible rescue effort by miners and rescue teams from as far afield as Edinburgh and Liverpool lasting more than two days.

The 13 men who sadly lost their lives in the disaster were;

The Rescue: Timeline and information on the rescue of 116 trapped miners: https://newcumnockhistory.com/mining-minerals/coal-mining/knockshinnoch-disaster-1950/the-rescue/

Video footage of a news report on the disaster from British Pathe news:  https://youtu.be/SnYOKy6_7Uc

The disaster was dramatised in 1952 with the release of the British film, 'The Brave Don't Cry', starring John Gregson, Alex Keir and Fulton Mackay.
. o 0 O 0 o .
Posted by MM7WAB Hairy Paul at 9:33 AM

MM7WAB Hairy Paul
Hairy Scotsman with a technical brain. A wee bit rusty and ragged at the edges but still going.